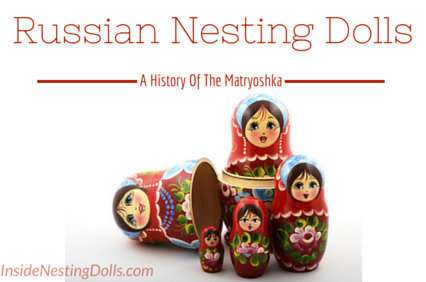 Russian nesting dolls, which are beautifully painted wooden dolls placed within one another, have become so ingrained with Russian culture that they have grown to be one of its most popular symbols.

In fact, many feel that these expressive matryoshka dolls exemplify the heart and soul of Russia.

Why Are They Called Matryoshka Dolls?

Matryona, Matriona, Matriosha and Matriyosha were popular female names in Russia prior to the Russian Revolution in 1917, and matryoshka is a derivative of those names. It is derived from the Latin root “mater,” which means mother or motherhood.

In a way, Russian nesting dolls are emblematic of motherhood. Each doll could be looked at as the offspring of the next larger doll.

And of course 'Mother Russia' is a term that has sometimes been used for the country.

These dolls have also been called babushkas, which is another word for grandmothers. This is despite the fact that they have never been officially named babushkas. However, the name has stuck.

According to a RussianLegacy.com survey, babushkas was the term used third-most often to describe these figurines, after nesting dolls and matryoshka dolls.

The town of Sergiev Posad has played a significant role in Russian nesting dolls history.

Located 45 miles northeast of Moscow, it has been known for hand-crafted toy making since the 1300s. Many believe that the first matryoshka doll was created here or in one of the villages that surround it.

This town has also been home to the Trinity Lavra of St. Sergius since 1345. Many believe that this beautiful monastery, one of the country’s largest, is the spiritual home of the Russian Orthodox Church.

Around the time that Russian nesting dolls started gaining popularity, a popular marketplace that was located in front of the monastery was home to an interesting collection of people that included monks, merchants and craftsmen. Many of them quickly became fascinated by this new doll set.

According to the author's note at the end of Corinne Demas' popular children's book “The Littlest Matryoshka”, the first nesting dolls were made in China about 100 years before they were initially produced in Russia. Chinese nesting dolls were similar in design to nesting boxes, which date to around the year 1000.

Also, it is believed that the first Russian nesting dolls were created with Japanese examples in mind (nesting dolls are said to have migrated from China to Japan shortly after gaining popularity in China).

One of the Japanese sets that likely served as an inspiration to Russian artists featured the Seven Lucky Gods of Japanese folklore.

Sergey Malyutin and Vasily Zvyozdochkin are credited with creating the first Russian nesting dolls. Sergey is said to have been responsible for designing and painting them while Vasily carved them.

The largest matryoshka doll of this set featured a young peasant woman wearing a babushka and holding a black rooster. Seven other beautifully manufactured and painted figurines were placed inside her.

Most were pictured with items emblematic of peasant life such as a broom, sickle, basket and porridge. One was even holding her younger brother. The smallest figurine of this group was a baby clothed in a quilt.

This collection can be viewed at the Museum of Toys in Sergiev Posad.

At that time in Russian society, demand for intellectual toys was growing, and these nesting dolls quickly became popular partly because they helped children more fully understand and discern changes in size and shape as well as learn how to count.

Bringing Them to Paris

Another pivotal moment in Russian nesting dolls history occurred in 1900.

Savva Mamontov was a patron of the arts who helped these beautiful dolls receive a significant amount of recognition, especially when he brought the matryoshka dolls created by Malyutin and Zvyozdochkin to the Exposition Universelle (World’s Fair) in Paris that year. Many who attended voiced their appreciation of these pieces of art, and the dolls were awarded a bronze medal.

This accomplishment and the recognition they received in the French capital helped encourage other Russian artists to create their own matryoshka dolls.

Unfortunately, when the Soviet Union was created in 1922 it focused more on mass production of just about everything it could, and that included Russian nesting dolls.

This meant they were no longer as individualized, or as popular, during this time. This situation was made worse when the private production of these and similar items became forbidden.

Fortunately, shortly after the Soviet Union dissolved in 1991 and Russia regained its status as an independent country, artists started to once again create individualized matryoshka dolls in significant numbers.

How Are They Made?

These dolls are most often made from linden, birch or lime trees, which are usually cut down around April.

The bark is stripped off of these trees and wiped with sap to help keep the wood from splitting. The logs are then placed in piles in a manner that allows air to circulate in and around them for a couple years until they are seasoned enough to be used in doll making.

Each of the Russian nesting dolls in a set is created from the same block of wood.

The smallest figurine is cut first, followed by the next largest doll’s bottom and top halves in that order. It is critical to remove the exact right amount of wood from the top half to ensure that it can be placed on the bottom portion. This process is repeated for each of the remaining dolls and requires a great deal of skill.

Once this is completed, the figurines are cleaned with glue and oil to help smooth the dolls’ surfaces. Doing so helps create a nice painting surface that is less apt to smudge and dries quickly.

The figurines are then passed on to the painter, and this artist provides his or her personality to the pieces. This process can be pretty elaborate as well.

Of course paint is popular for decorating the dolls, however watercolors and dyes have been used as well.

After they are decorated, lacquer is usually used to protect the fresh paint.

Traditionally, Russian nesting dolls were themed after peasant women. However, many other varieties have become increasingly popular since then.

For example, Russian political leaders have been featured on several occasions. In fact, the “Gorby” doll was extremely popular during the time that Mikhail Gorbachev served as the leader of the Soviet Union.

Other examples that have proven popular over the years include Christmas-themed nesting dolls as well as those themed after animals, historic figures and professional athletes.

There is a Russian nesting doll that consists of 72 separate pieces, which was featured at Expo ’70, a World’s Fair that was held in Osaka, Japan. It was more than 3 feet high, and some of its figurines were so thin that it was almost possible to see through them. The dolls commemorated former Russian leader Vladimir Lenin’s birthday.

This famous piece of art was produced in Semyonov, another city that specializes in the production of matryoshka dolls. It is located 300 miles east of Moscow and is situated in a heavily wooded area, which is perfect for making these and other wood-oriented items.

There’s Even a Video Game?

Yes, “Stacking” is a video game that was released on various platforms from 2011-13 and is based on matryoshka dolls. Players control Charlie Blackmore, the smallest doll, as he goes inside larger dolls and uses them to help solve challenges. Charlie ultimately wants to save his siblings from industrial slavery.

Its designer, Tim Schafer, was inspired to create the game after he saw his daughter playing with Russian nesting dolls.

Harkening Back to a Simpler Time

Although the world has changed quite a bit since Russian nesting dolls were first created in the late 1800s, they provide a reminder of a simpler time.

In fact, these beautiful matryoshka dolls adorn bookshelves and fireplaces in homes in places as varied as Moscow, Johannesburg, Tokyo, Budapest, Buenos Aires and Chicago.

What are some of your favorite doll patterns? Please let me know in the comments below!​

Viktor Pavlov
Viktor has been researching and collecting nesting dolls for many years and is now bringing his passion for matryoshkas to the Internet.

About | Contact | Privacy Policy | Terms of Service | Disclosure Policy | Site Disclaimer
Inside Nesting Dolls is a participant in the Amazon Services LLC Associates Program, an affiliate advertising program designed to provide a means for sites to earn advertising fees by advertising and linking to amazon.com. Amazon and the Amazon logo are trademarks of Amazon.com, Inc. or its affiliates.